In another amazing Hicks Car Works exclusive feature, we bring you IRM's latest locomotive acquisition! It's hidden from public view in one of the Museum's secret storage facilities, so only we have the ability to bring you pictures of this unique equipment! The lighting is deliberately kept dark so the paint won't fade, but I've tried to adjust the photos as best I could. 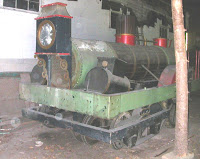 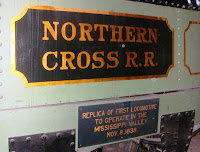 It's a highly detailed replica of the first locomotive to operate in the Mississippi valley, c. 1838. And with its rubber tires, it can be used in parades. I love a parade. 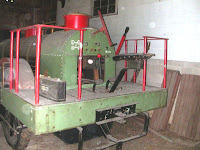 You have probably never seen a steam locomotive with a gear shift pattern painted on the backhead (R). Until now. 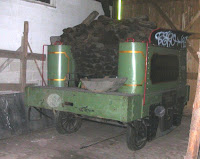 And here's the tender. We are all so lucky that Nick Kallas never lets an opportunity like this slip by! 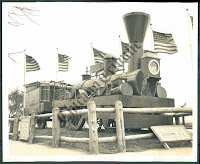 Update: I hadn't realized it was supposed to be so historic in its own right. Here's a picture from 1948 (copied from eBay) of this gem at the Fair. We have the stack, but I don't know about the signs saying "Wabash" and "Rogers".
Randall Hicks at 5:22 PM

Please identify yourself with a name of some sort in your comment. Completely anonymous comments will be deleted. Thanks!